Jennie R. Dubois: Her Sinking and the Search for her Resting Place 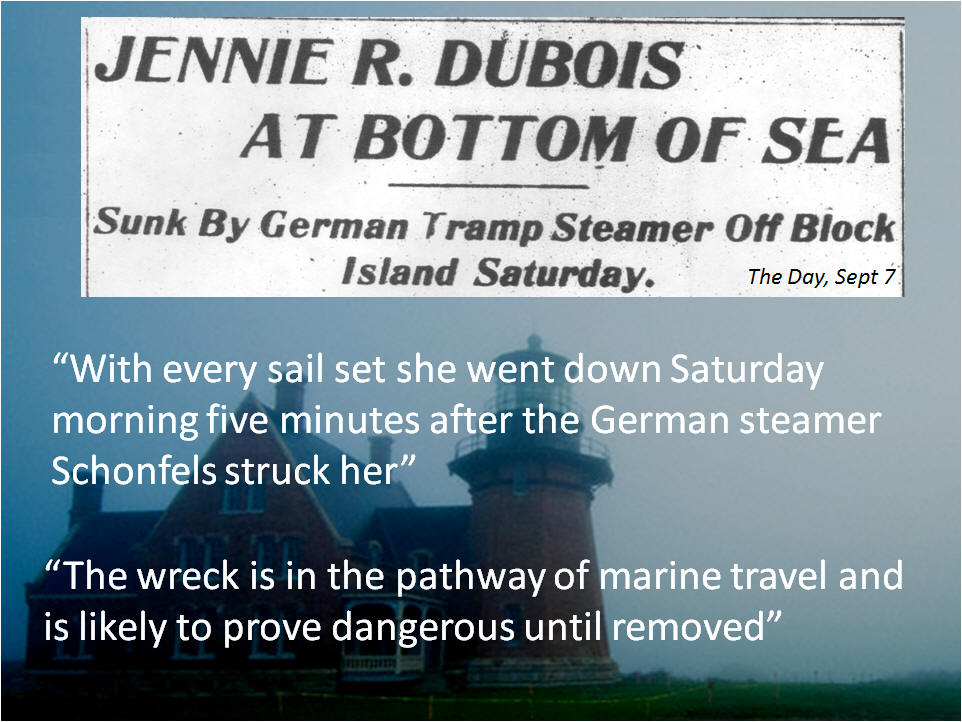 Unfortunately she sank a short nineteen months later on a foggy Saturday morning in a collision with the German Tramp Steamer Schoenfels.  She was situated in the path of marine traffic and was considered a hazard to navigation

After she sank FOUR topmasts were still showing above water. We see her here as she appeared in the Providence Journal on September 7th, 1903  Note the Foremast is not visible or present.

At this point in my research I was captivated by the history.  What started out as an obscure shipwreck story turned out to a tale rich with local history and quickly took on personal meaning for me.  The Dubois was built next door to the town I grew up in and she was lost in an area I spend a great deal of time diving.  Also, to our knowledge no one had yet located the remains of the Jennie R. Dubois, although I knew of many who had tried.  The challenge lay before us, however, it’s a VERY large ocean out there… Just how do you go about trying to locate a sunken shipwreck?

So… now that we’ve amassed all this information, just how do we perform a shipwreck search. Typically we use some sort of remote sensing gear, such as a echo sounder. Echo sounders (also known as fish finders, bottom machines, sounders) emit a pulse of sound vertically into the water column towards the sea bottom. The sound pulse reflects off objects in the water column and sea bed to give a two dimensional view of the water column. This technique has been used for many decades as a tool to find shipwrecks. Although a very affordable and useful technique, the echo sounder covers a very small area of the sea floor, and it’s sometimes very hard to discern whether or not what your seeing on the bottom is a shipwreck or geology. 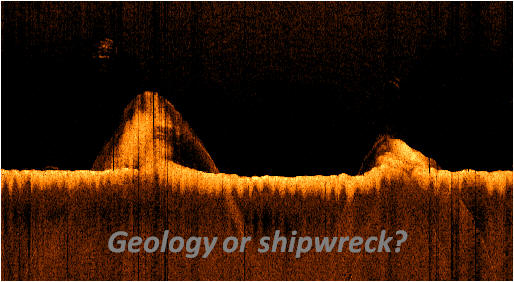 Side Scan Sonar is another tool which gives a more “three dimensional” view of the sea bed and covers a much larger area then echo sounders.  The image of the Lake Crystal below is in fact the same shipwreck imaged in the above echo sounder sonogram.  We used side scan sonar to look for the Dubois.

Side Scan Sonar uses a towed body (towfish) which has a port and starboard (left & right) transducer.  It is typically towed behind the boat on a cable and the data is sent to a topside display used to view the sea bed.

Our search for the Jennie R. Dubois began on September 7, 2002 and five years later on September 22, 2007 we made the first dive on a site that proved to be the starboard hull section of the wreck.  During the course of our search the boat traveled a linear distance of 100 nautical miles and we covered a 17 square nautical mile area.

Below is a plot of the vessels track made during most of our search operations.  You can see Block Island’s southeast light in the upper right hand corner of the chart. 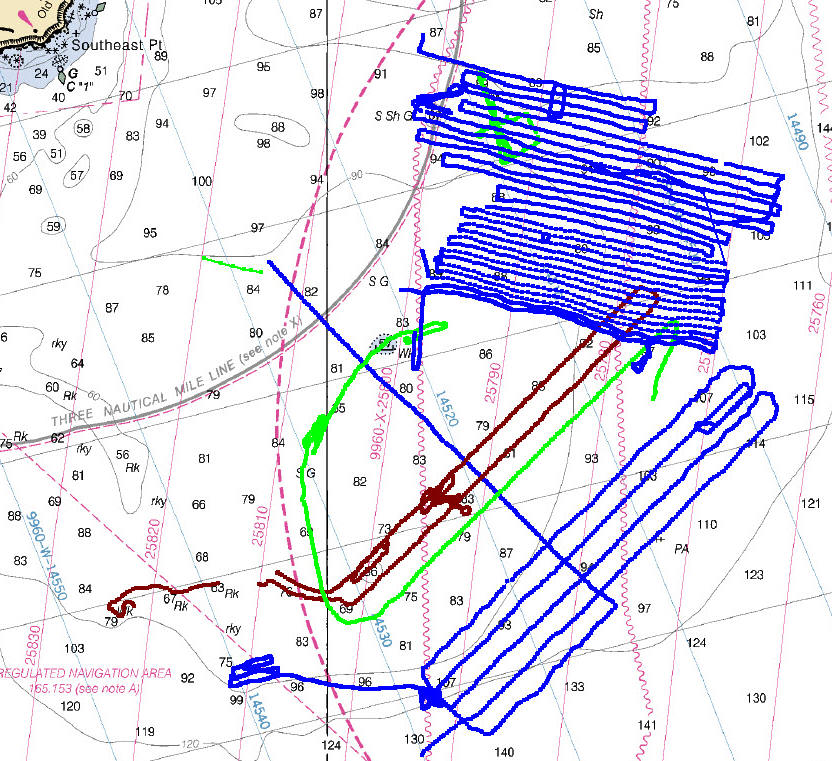 During our search for the Dubois we were certain that we were looking for a “typical” schooner shipwreck.  Below we see a sonogram of the  246 foot long schooner barge West Virginia lost in 1909 off Monomoy Island, Cape Cod.  The bow is in the upper left, the stern in the lower right, and the keelson runs down the middle of the shipwreck.  This is what we expected to see when we found the Jennie R. Dubois.