I just wanted to give an update on our project to locate the final resting place of the U-550.  Although we weren’t able to get a search trip off this season that hasn’t kept me from continuing the research and beginning to dig into the human side of the story.  As you know I spent about six months during the winter of 2009/2010 examining the technical details revolving around the sinking of the U-550. The ultimate goal of this research was to come up with a well defined search area where we’d find the U-550.  I’m continuing to refine our theories as to where the U-550 is but my current focus has been talking with the guys that were out there putting their lives on the line to get the war supplies across the pond safely.  More specifically I’m tracking down the guys on the Destroyer Escorts (DE’s) USS Gandy, USS Peterson, and USS Joyce who sank the U-550 and have firsthand accounts of that day.  That said, the more I dug into this and started talking to the DE Sailors the more and more I’ve been touched with the “big picture” of what these guys were doing.  Not having any previous contact with WWII vets I didn’t have a really good appreciation for what they were out there doing and the sacrifices they’d made.  Sitting down and talking with these guys really brings home why they are “True American Heroes”.

This past May I was fortunate to get in touch with one of the sons of the DE sailors on the USS Gandy, Russ Micinski.  His father Ray was a gunners mate on the Gandy and was present during the conflict with the U-550.  Russ got me in touch with Bill Beetel, USS Poole, who was the contact point for Escort Division 22 and coordinating their attendance at  an upcoming DE reunion in Plymouth Meeting PA.  I contacted Bill and he was extremely helpful in getting me information on the reunion AND a list of “current” names and addresses of sailors on theUSS Gandy and USS Peterson.  I sent out seventy-five letters to the sailors on this list explaining our U-550 project and my desire to contact them,  I received responses from over a dozen of these sailors or their relatives.  Last week John Anderson and I attended the DE reunion in Plymouth Meeting PA and had the honor of meeting Ray Micinski (USS Gandy) and John Abrams (USS Peterson).  We had a great time sitting around hearing their stories, talking with other DE sailors, and we were able to do hour long videotaped interviews with both Ray and John.  All I can say is, what a great bunch of guys.

We arrived at the reunion Sunday night and then left Wednesday morning driving four hours west to Mount Pleasant PA to meet with another DE sailor, John Hudock (Who-dock).  John was on the USS Gandy and due to extenuation circumstances was unable to attend the reunion. We met John and his son Alan at John’s home in Mount Pleasant around noon and spent a good three hours visiting with them and learning about John’s personal life and his experiences in the Navy.  It was an honor to be allowed into John’s home to talk with him and I learned so much that just can’t be put into words.  I started down this path wanting to contact the DE sailors primarily about the conflict  with the U-550 and I’ve walked away with so much more, what a great group of guys.  John then took us out to lunch at a very special local restaurant, Leo & Sons Grill 31, which is located just across the street from the Veterans Park.  Grill 31 is completely decorated with pictures of local veterans and they’re a huge contributor to the community and local vets.  It was a day well spent!

As I mentioned previously I’ve been in contact with about a dozen DE sailors from the USS Gandy, USS Peterson, or USS Joyce.  These sailors are located all around the country and although not critical to helping us find the U-550 I think it’s  important that we take the time to visit them and capture their story on tape for future generations. So, over the next six months my intent is to visit each and every one that will allow us to call on them and document the incident with the U-550 and their service to our country.  Realistically this is going to be a major financial drain, one which I’ve been funding myself, so I’m going to work on a little fund raising plan to help get this part of the project done…  before it’s too late.

Sunday we arrived at the Hotel and spotted a few bumper stickers on cars in the parking lot, we knew we were in the right place… 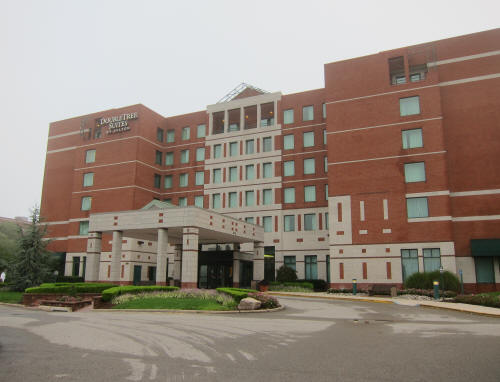 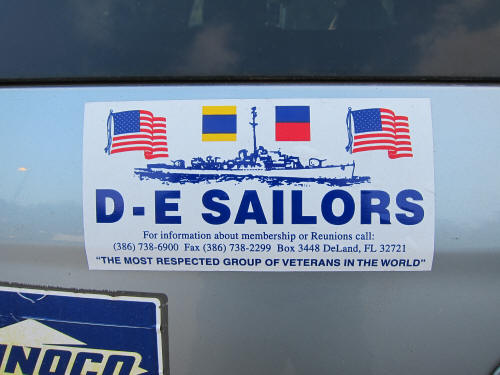 John and I load up all the gear and head to the room. 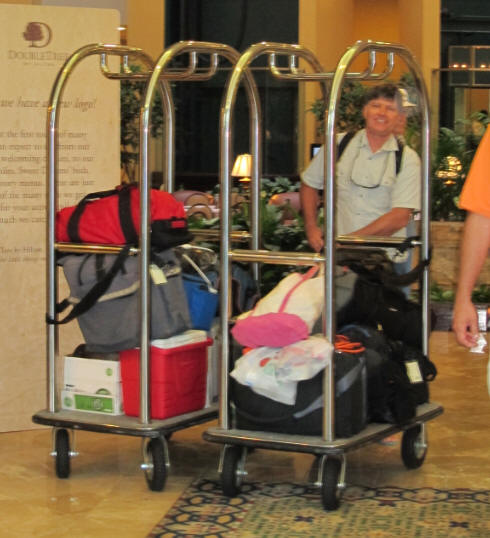 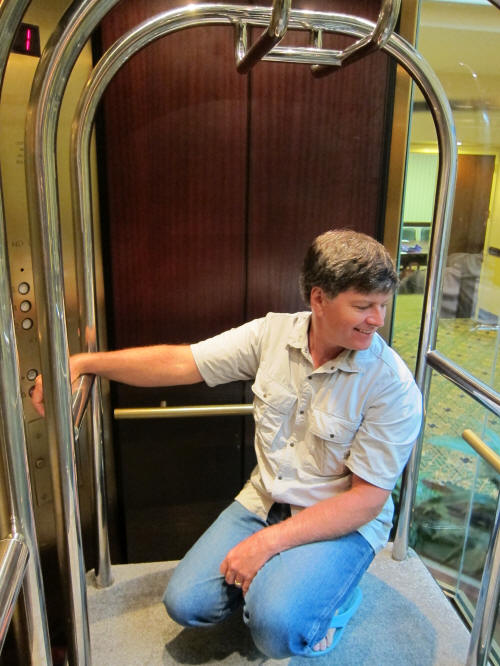 Monday Morning we setup shop in the room and got ready to meet some new friends. 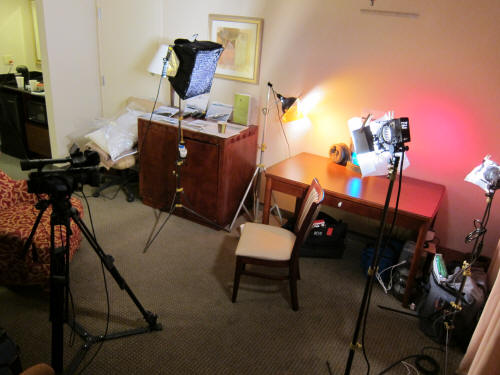 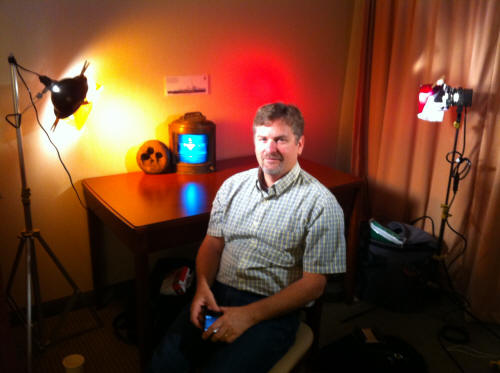 Going downstairs we meet up with a few DE sailors and family.

Tuesday morning I presented to the Escort Division 22 reunion attendees on the U-550 project.

We spent the rest of the day hanging around the hotel talking with many DE sailors and there families. 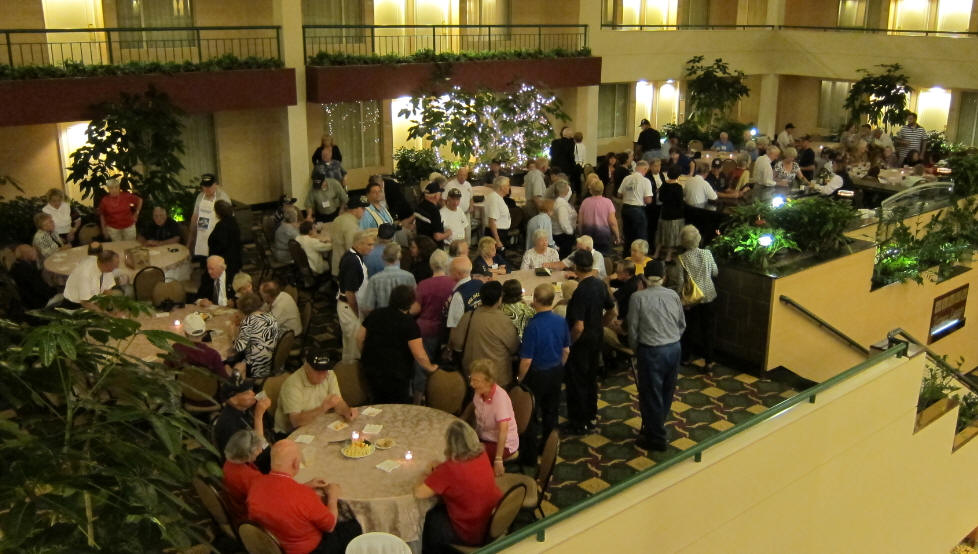 Wednesday morning John and I headed a few hours west to visit John Hudock, USS Gandy.  John and his son Alan graciously welcomed us into his home for the interview:

John then took us to lunch at a very special restaurant, Leo & Sons Grill 31, which is located just across the street from the Veterans Park.